And so it begins.

And so it begins.

It's finally time, I've been waiting for this day more eagerly than for any silly man made holiday. A day where I can finally show off what's happening behind tightly shut doors!

As it is the first article and I don't want to spoil everything at once, we'll focus on a few topics today, namely character customization, new 3d model system, and the lighting.

Before we dive in further. I have to say this is still an EARLY WIP status. And things might change over time (For the better!).

So, least intimidating but still key things first, the lighting.

The lighting on the newest engine was significantly improved. It's sharper, it doesn't end abruptly on the walls causing weird cuts. This might be of little importance but the ambiance is what creates world building, and lighting is the big part of it. 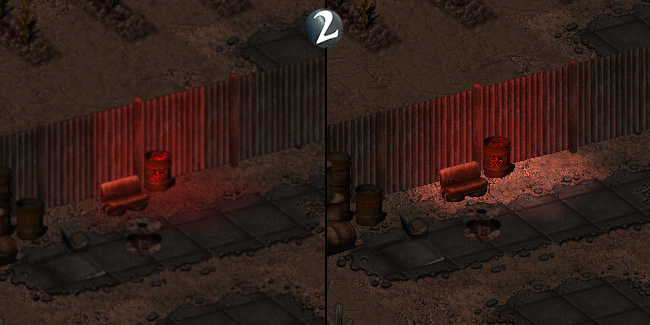 On the first example, we're going to find out how much better light shines onto walls compared to the previous lighting system, which is a far cry from our new engine. From mapper's perspective lighting took too long because of how it reacted with walls. The new system not only looks far better but also saves up work of creating fake light tinting on walls and blocking light passages.

You can also already notice the quality and sharpness improvement on the rendering. The game brings more detail thanks to our heavy work to export all 14,000 + graphics from FRM to PNG format, with some quality rework, and rebuilt animations by decoding their offset from original files and building .fofrm files that are equivalent of the frame by frame gifs. 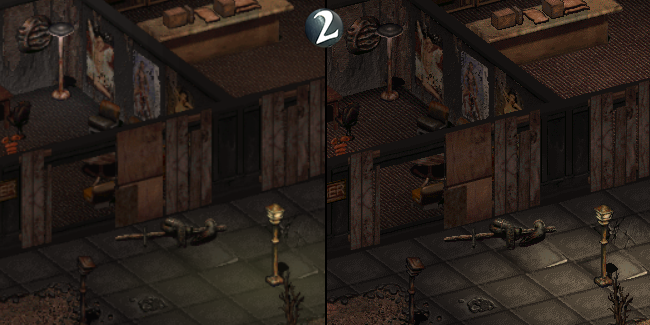 This even further shows the level of detail in our reworked art on our new engine. 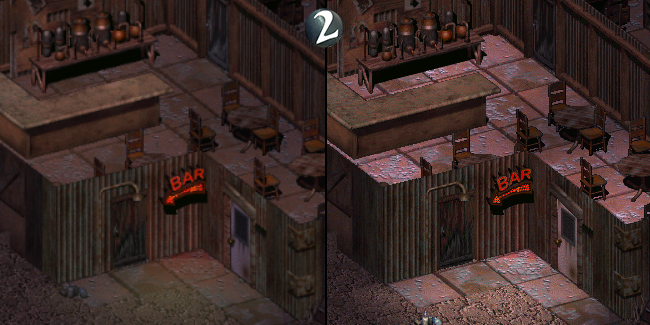 And just a cozy bar as the last example.

Here's the link to 2:1 scale images attached for closer comparison if you're curious!

So! Since we have a rendering and lighting system behind us, time to take a small sidestep and talk about planned features that are new compared to Season 3. Of course, things might change over time.

A friend list - Come on, it's 2019!  What game doesn't have a built-in friend list where you can see if your friends are online and around! Solo players that did not partake in big PVP gangs couldn't just log in and without any other third party find something to do. This is going to help.

Party System. Ability to see your squadmates location no matter what and keep an eye on their health/action points, be able to tag enemies and mark places lets you approach the game more tactically with your squad.

Chat System. A whole revamp on chat system was necessary, now sporting a Global/Map/ Local/Faction/Private Messages with various filters and options lets you configure the chat window the way you desire!

Now, enough of that feature talk. More things to show to catch you up!

So, onto the topic of 3D Support, characters, animations. Goals to reproduce the old-school style...

Well, this was a challenge, and most of my personal time was dumped into development and tweaking the models, just making everything work was an impossible feat from the very old files from long abandoned Fonline 3d project.

But! Thanks to the amazing help of Karpov, we have finished All necessary 3d models and animations for the game! Karpov, which some of you might recognize, cooperated with us to bring 3d work onto a new engine system, we discussed restructuring together, we have found missing armors and animations, and have completed them. That includes 2 other playable races than human, but it's something I won't spoil yet.

(One of the many models specifically designed for Fonline2 by Karpov.)

There were 3 core things that we had to follow while developing 3D.

1) Reproduce the style - We all know how the old fallout models look, they are not the nicest but they have an original charm and fit perfectly to the post-apo environment.

2) Reproduce the animations - After years, we are all used to see how the character walks, how a character stands, how he or she holds, shoots, plays with a weapon as an idle animation. So our goal was to frame by frame reproduce it.

3) Cut down repetition - So, this might sound odd but let me explain. All of the items share the same animation In 2d critter, and some armors by default look exactly the same, for example, combat jacket. Our goal was to stop making everything look like clones by providing a model for EVERY weapon and armor in the game.  We have completed it.

Another repetition was by how players look, we have solved this by customizable cosmetic settings, the player can decide if his helmet from armor, for example, combat armor, should appear, or we should still see his hair without a helmet on, Same rule applies to shirts, and pants.

So, do you want to have red mohawk even when you equip combat armor? Feel free! Want to wear a pink shirt under your chest piece? We're not going to stop you!

On character creation, you will be able to choose your default clothing, skin color, and the hairstyle. The clothes and hair will be fully customizable by a color slider, allowing you to create your own wastelander.

Of course, it doesn't mean customization is over, there is a multitude of vanity items to spruce up your looks, and you can always visit a barber to try out new hairstyle on your character.

We're proud and happy to look behind and see so much progress. Especially that we're just starting. We will develop Season 4 more openly from now on, especially when our issues with the engine are now resolved, or easily solvable thanks to it becoming open source.

We can't give out a roadmap, especially that this is a hobby project and life can hit hard sometimes, but we will provide monthly article if nothing goes wrong from now on! We also plan to release a tech demo somewhere this summer,  where players can come in, test the game performance and let us collect data on how things are working out.

And that is the end of Patreon launch article. We hope you have enjoyed the read!