If you are new to this game and have no clue how to make any decent character, then you can use this starter character for new players to help you in your first journey in the Fonline2 world. This character setup will provide you access to most important Perks, and will let you overcome most upcoming challenges. 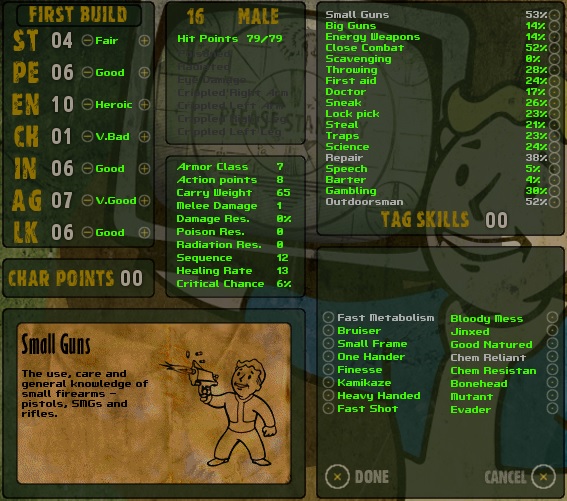 Few words about this character:

How Much Skill?
Here is some advice for Skill percantages that you should aim to have in the end. Those nunbers vary from character to character, but there are some constant averages:

Perks
You can take a new Perk every three levels of experience. Here is the list of recommended Perks:

You should complete all the possible quests in the Hub and Junktown. Then you can get crafting professions and gear yourself up. After that, you can collect caps, buy gear, get experience, play with some friends, kill enemies in encounters loot them and sell the stuff. Craft your own tent or buy yourself a base. Refer to wiki and forum, and do that often. Remember that Wasteland is harsh, you are probably going to die many times. Be sure to you store all valuable items in a safe location before you head out to the wastes.

For more valuable informations about getting started and surviving in brutal world of FOnline2, check the links below: